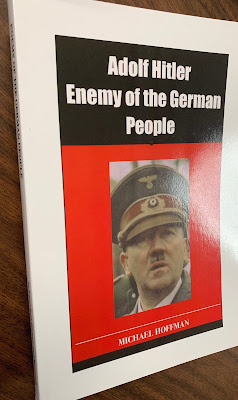 Revisionist scholar Michael Hoffman revises the revisionists with this new chronicle of the unprecedented disasters Adolf Hitler needlessly brought down upon the heads of the German people, and countless others.

Excavating Hitler’s occult initiation, his Nazi ideology of self-worship, and his first high profile bloodshed — the murders of his own colleagues — the culmination of Hoffman’s thesis is his review of Hitler’s invasion of Soviet Russia, demonstrating that it had no chance of victory, and was in fact a mass suicide operation by a reckless, apocalyptic gambler who saw himself transcending the fate of the burned, beaten and prostrate German people as he was transfigured into the presiding spirit of Götterdämmerung, the final act of Wagnerian legend.
__________________

“The truth-teller’s vocation is a re-visioning of every human belief in the face of new information when it contradicts the old. Some of those who say they are revisionists are not. For them revisionism is a means to an end—the rehabilitation of Adolf Hitler’s image and reputation. The revisionist epistemology itself is of little interest to such people. They undercut it with their rush to affirm virtually any disinformation that buttresses their ‘side.’
“Revisionist history takes no sides and has no agenda. It ineluctably follows the truth wherever it leads, which is what makes it both an endlessly fascinating adventure, and a critically important constituent of the advancement of knowledge against the human tendency toward self-deception.” —Michael Hoffman

Table of Contents
1. The Russian Roots of Nazism. 2. Nietzsche, the “Jews” and the Goyim. 3. Corporal Hitler: Germany’s Future Führer in World War One. 4. Hitler Had Him Murdered: Gregor Strasser. 5. Did Stalin Want War with Germany in 1941? 6. Hitler’s Invasion of Russia: A Snowball’s Chance in Hell. 7. Hitler’s Magical Thinking. 8. A Supernatural History of the Third Reich. Appendix I: The Commissar Order. Appendix II: Feder’s Revival of Medieval Catholic Doctrine. Appendix III: Zinskauf. Appendix IV: “The Good War.”

Quality softcover. Illustrated. 216 pages.
Order at this link
(scroll down the page) 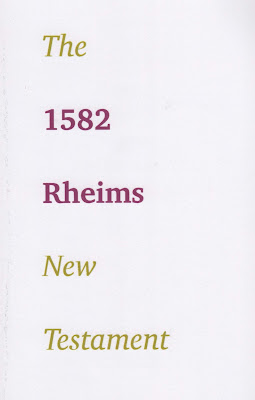 “Every corner of England was searched for those books (Rheims New Testaments) — the ports were laid for them, Paul’s Cross is witness of burning many of them, the Prince’s proclamation was procured against them; in the universities by sovereign authority colleges, chambers, studies, closets, coffers and desks were ransacked for them.”

Which New Testament is the most banned and hunted in western history? It is a New Testament you have never heard of — and yet perhaps you have!

Answer: The Rheims New Testament of 1582.

There’s no doubt that a New Testament by the name of Rheims (or “Douay-Rheims” in the case of the entire Bible), will be found in many contemporary Catholic bookshops, and even well-stocked Protestant stores, as well as on the Internet.

But those so-called “Rheims” were actually re-written by Bishop Richard Challoner and though they bear the name “Rheims,” churchmen ranging from Cardinal Nicholas Wiseman to Scripture exegete and translator Msgr. Ronald Knox, have protested against calling the Challoner New Testament, “Rheims.”

The original and true Rheims first published by fugitive Catholic scholars in France, is a slavishly faithful translation of St. Jerome’s Latin Vulgate. It has been out print for nearly a hundred years. We have faithfully printed verbatim the New Testament text of the original, but in modern type and spelling, with easy-to-read, large print. Our edition includes a new introduction by historian Michael Hoffman, and another by Benedictine scholar Gilbert Roger Hudleston, O.S.B.

This is the New Testament that would not die. The Latin Vulgate in English, the authentic voice of Britain’s repressed and hunted Catholics, has returned to print. Smuggled into Britain more than four hundred years ago, it is the magnum opus of the English Counter-Reformation.

From a Lutheran customer:
"I’ve never been a King James-only man and when I learned that the translators of the King James Version quietly used the Rheims New Testament in their work I was determined to study it. Your authentic Rheims has been a great read and I’ve been blessed by it!"— Bill,  Pennsylvania

From a lady-buyer in Canada:


“I received the new Rheims New Testament but the American friend I showed it to was so impressed with it I had to give it to her. You would have loved to see her gratitude and delight. I will order another one for myself and maybe two in the event I have another friend so affected! May Our Lord Jesus Christ richly bless you.” Diane

For shipping purposes, please select from the menu according to whether you are a U.S., Canadian or Overseas customer:

Usury in Christendom: The Mortal Sin that Was and Now is Not 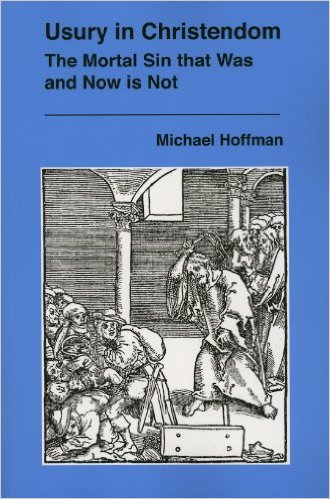 “I am writing for humanity in a world eaten by usury.” Ezra Pound

From Michigan-based economist Daniel Krynicki:
"Monetary reformers dot our landscape, the majority of whom consider that Christian faith is an evil that works against society’s best interests. They consider that the outlawing of interest in moneylending would be a legal practice that will actually be the act of an all powerful state…I once had been active in their 'Google Social Credit' forum. At the time many of my own ideas were still in a formative stage. But after reading Michael Hoffman’s book Usury in Christendom, it became obvious that an all-knowing super intelligent being informed us three and a half millennia ago that the only way to administer a financial system that will benefit all is without the usury."

Unforgettable revelations abound in this indispensable study of the rise of the Money Power. Usury in Christendom provides the reader with a detailed understanding of how a den of thieves robbed the followers of Christ of their patrimony. It is grounded in an extensive study of rare and primary sources and represents a landmark revisionist history of how the breeders of money gained dominion over the West.

For most of the first 1500 years of Christianity usury, the lending of money at interest, was unanimously condemned by the Fathers of the Early Church, and by popes, councils and saints, as a damnable sin equivalent to robbery and even murder. Any interest on loans of money, not just exorbitant interest, was defined de fide as a grave transgression against God and man.

Mr. Hoffman confronts the reader with a startling datum: the overthrow of magisterial dogma and the approval of scripture-twisting heresy occurred inside the Church centuries before the Enlightenment and the dawn of the modern era, culminating in the overthrow of divine truth; an epochal act of nullification. Usury in Christendom: The Mortal Sin that Was and Now is Not resurrects the suppressed biblical, patristic and medieval Catholic doctrine on interest on money, provides new information on the record of early Protestant resistance to the usury revolution, and the discernment, by Dante and other visionaries, of the sub-rosa connection between usury and a host of abominations that continue to plague us today. Western civilization was profoundly disfigured by the ecclesiastic exculpation of the charging of interest on debt. The result has been a pursuit of usurious profit unconstrained by the Word of God, the dogma of His true Church, and the consensus patrum of fifteen centuries.

This revisionist history of how a den of thieves robbed the followers of Christ of their patrimony is grounded in an extensive study of rare and primary sources, and represents a landmark reassessment of how the breeders of money gained dominion over the West.

Table of Contents: Introduction. Biblical, Patristic and Magisterial Teaching. Precursor: Usury banking in Catholic Florence. Usury and Simony in Catholic Germany. The Reformation: Usury Pro and Contra. A Faithful Irishman Persecuted by the Hierarchy. Agents of the Money Power. Quality of Life. “Jewish” Usury. St. Anthony of Padua at the Usurer’s funeral. John Jewel Smites Usury. Timeline of Papal Usury. Dogma of the Council of Trent. Glossary of Terms. Bibliography.

Comprehensive List of Contents: Double-Talking Encyclical. King Edward’s Act Against Usury. Critical Distinction Between Ger and Nokri. Christ’s Parable of the Talents, and the Mammon of Unrighteousness. Leviticus Jubilee. Root and Branch of the Money Power. Escape Clause for Mortal Sin. Usury and the Fathers of the Early Church. Unanimous Medieval Struggle Against Interest on Money. The Dogmatic Third Lateran Council. Council of Lyons II. Council of Vienne. Usury in Medieval Canon Law. Magna Carta’s Bishop. Confessors’ Manuals Classifies Usury as Mortal Sin. Christian Economics of Thomas Aquinas, Dante Aligheri, Ezra Pound, Wendell Berry, Arthur Penty, Vincent McNabb, John Ruskin. The Canker that Consumes the Conscience. The Unholy Trinity of Florence. The Usurer’s Dilemma. The Usurer’s Fire. The Usurer’s Indulgence. The Ciompi Insurrection. Manifest and Occult Usury. Mortal Sin for a Worthy Cause. The Den of Thieves Returns to the House of God. Catholic Origins of Usury Legalization. Usury Unites With Simony. The Catholic Roots of Protestant Capitalism. Casuistry and Usury. Early Years of the Protestant Campaign Against Usury. Biting and Profitable usury. Some Myths of Max Weber. Early Puritan Resistance to Economic Secularization. Permission for Usury in Late Stage Puritanism. A Capitalist Summa: Ludwig Von Mises & Ayn Rand. Misdirection from the Right. Judaizers and Judaizing. Primacy of Gentile Usury. Breeding of Money. 1917 and 1983 Codes of Canon Law, and much more.

For shipping purposes, please select from the menu according to whether you are a U.S., Canadian or Overseas customer: