122 issues were published
Many issues including numbers 95 through 102, are available at this link
More issues are available for purchase below

[To order our books browse at this link] 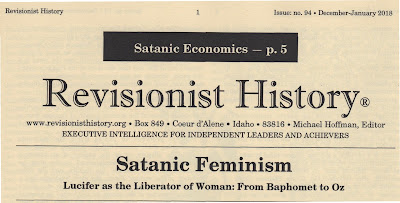 In-depth studies:
“Satanic Feminism: Lucifer as Liberator of Woman: From Baphomet to Oz ”

Also in this special “Satanism” issue of Revisionist History®
Satanic Economics: The Bank of England at its Founding

Issue no. 94 shipped. To order request an invoice by e-mail 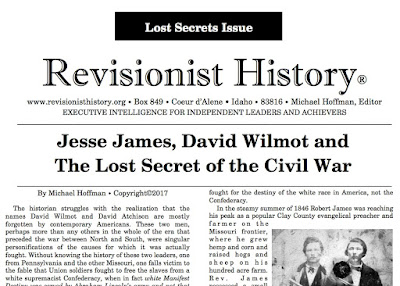 Northerners insist that Lincoln’s Union Army fought to free the slaves and save the Union.

Southerners say the Confederacy fought for states’ rights and the white race.

With regard to the overwhelming motivation of these troops, none of the preceding claims are true!

The "Lost Secret of the Civil War" is the subject of the cover story of Revisionist History newsletter no. 93, and in its pages you will learn a truth long concealed — the compelling motivating factor that sent the boys in blue against their brothers in gray.

Also in this “Lost Secrets” issue of Revisionist History® no. 93:
The Lost Secret of Martin Luther’s Reformation

The 500th anniversary of Luther’s publication of his 95 Theses passed on October 31, amid a slew of books, articles and broadcasts in the mainstream media attempting to explain and interpret Luther and his movement. The emphasis in the misdirecting media was on “Luther’s quest for freedom,” and “Luther’s revolt against the indulgence racket,” and "Luther’s hatred of Jews.” Among conservative papalists there was even an attempt to brand Luther an instigator of greed, but Rome’s situation ethics were absent from Luther’s theology of debt, which was entirely in line with all Catholic dogma prior to the Renaissance. So in the matter of money, who was the rebel, Luther or the usury-enabling pope?”

Luther did seek freedom and he was in revolt against the sale of indulgences, but those details are not even half the story. He had no animus against the Judaic race. His war was with usury banking, the ideology of the Talmud and the papacy’s revolutionary embrace of both during the Renaissance. Here are long-hidden revisionist facts suppressed during the 500th anniversary commemorations — the Lost Secret of Martin Luther’s Reformation.

More suppressed truths in issue no. 93: Decrypting The Highway 91 Massacre in Las Vegas; Martin Luther King’s FBI file; Women in the Third Reich; and much more!

The Talmudic Defamation of Western Civilization New facts from history: “The (medieval) system may be best summarized by saying that the Jews were permitted to fleece thoroughly the people of the realm on the condition that the king fleeced them. This is the main cause of the extraordinary hatred of Jews shown throughout medieval Europe; they were the great extortioners and usurers and they were also agents of royal tyranny and oppression.”

Penetrating insights: It is the immunity granted to Talmudic hatred of our civilization which empowers and emboldens the Left’s calumnies. Denigration of the West has its intellectual root in the Talmudic tradition. The West will never free itself from Leftist calumny of “dead white males” as long as the so-called “Conservatives” timidly recoil from confronting the fount of the oldest institutionalized character assassination of Christian authors—the Talmudic mentality. In this issue we study those authors: Cynewulf, St. Bede and Thomas of Monmouth; Geoffrey Chaucer, John Foxe, Christopher Marlowe, William Prynne and John Milton. We reveal the Holocaust of All Time, and provide an unprecedented analysis and history of the employment of the swear-word, “Antisemitism.” Western Civilization cannot be separated from its heritage of challenging Talmudism without fatally weakening the bedrock of our civilization.

Also in this issue: The Fiasco in Charlottesville. Plus: •The Virginia Militia’s Just Indian War. And: Irish slaves preferred over Blacks. Also: A Silicon Valley rebel against the Sacred Diversity Religion. Plus: The Origins of North Korea’s Nuclear Threat. Red China’s technology thefts. Michael Hoffman’s eulogy for Ernst Zündel, “A Lover, not a Hater.” And more! 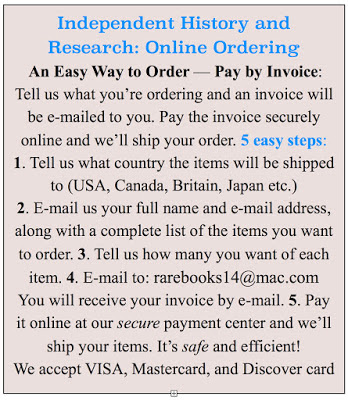 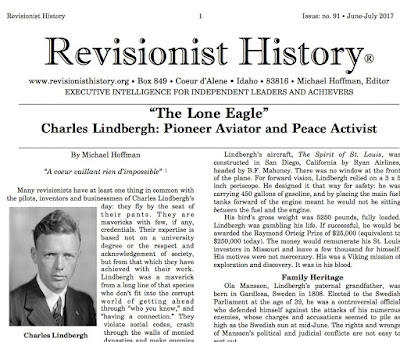 Contents of issue no. 89: Establishment media are increasingly haunted by growing interest in the revisionist history of the enslavement of whites: we refute their latest attempt at denial; also: A New History of the heartless Highland Clearances in Scotland.

A Prequel to The Occult Renaissance Church of Rome: sneak preview of Hoffman’s new book, including latest research information not found in the book itself!

And: How the British Secret Service Helped to Found the Theocracy that Guides ISIS.

Plus: Conspiracy in the Air: 9/11 Air Traffic Control Testimony Erased.

Also: No Goddess Can Ever Save Us: Deconstructing the goddess/victim religion of feminism, and much more!

To order any newsletter issue or issues follow these instructions if you choose to pay by invoice with your credit card:


PAPIST ROOTS OF THE FRENCH REVOLUTION: FROM TERRORIZING HUGUENOTS TO TERRORIZING CATHOLICS

Hoffman studies the late medieval and Renaissance papal doctrine that “error has no rights” and demonstrates that Jesuit-trained intellectuals applied this doctrine to their revolution in France -- against Catholics! He argues that the French Revolution would not have been possible without Rome’s terror against the 10% of the French population who were Calvinists (“Huguenots”). Also: Homosexual traitors in the British Secret Service. And: The media’s Fake News about Muhammad Ali and the Vietnam War. Plus: America, founded by Christians. Also: Contesting Establishment-approved Conspiracy Theories. And: update on recent attacks on Hoffman and Independent History and Research. USA: $7.00 Canada: $9.50. Foreign: $10.50
________________________

A new chapter in the chronicle of the holocaust against the German people:
The Mass Rape of German Women at the end end of World War II by Americans and allied troops other than Russians

Inconvenient history revealed: 190,000 German women raped by US soldiers, British, Belgian and French. Includes a section on the rabbinic theology of rape in wartime


• And: History Under Attack at Bolshevik Yale University


• Plus: Confessions of a Climate Change Heretic


• Also: The Assault on Freedom of Speech on our Nation’s Campuses 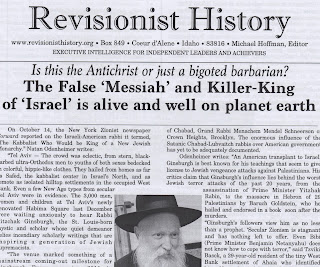 Contents
The Antichrist here now?
• SPECIAL REPORT: The False Messiah and Killer-King of “Israel” is alive and well on planet earth

• And: The Secret behind Hillary Clinton’s Plot to Kill Libyan Leader Muammar Gaddafi

• Plus: Remembering Phyllis Schlafly: an Indomitable Fighter and Role Model for Women

From a subscriber in Ireland:
"Your review of 'Denial' is worth the price of the year’s subscription! It is safe to say that nothing remotely like it, in terms of what you noticed in the movie, will be found in any other review, and I expect there will be many reviews. Well done indeed. What you show, amongst other things, is that it is an unexpectedly interesting film. And I certainly look forward to watching it after reading your review.”
USA $9.00 Canada: $10.50. Foreign: $11.50 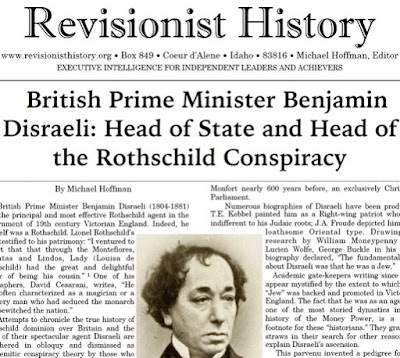 Long before Hillary Clinton became a watchword for unscrupulous politics and corruption, Benjamin Disraeli personified those vices and many more as Prime Minister of Britain and prime mover for the Rothschild banking dynasty.

In Revisionist History issue no. 85, historian Michael Hoffman’s investigative research affords the reader the latest information on the Rothschild conspiracy.

•The Rothschilds become synonymous with the British Empire

•Rothschild backing for the Muslim war against Christians

•The Dual Loyalty of the “Plutopolitans”

• Endymion of the sleep-walkers.

Submitted for your knowledge and empowerment: a ground-breaking new study of the world’s paradigmatic banking dynasty.

Here are facts you can depend upon — executive intelligence for independent leaders and achievers: in-depth articles filled with meticulous detail and scrupulous striving for historical accuracy.

To order any newsletter issue or issues follow these instructions if you choose to pay by invoice with your credit card: 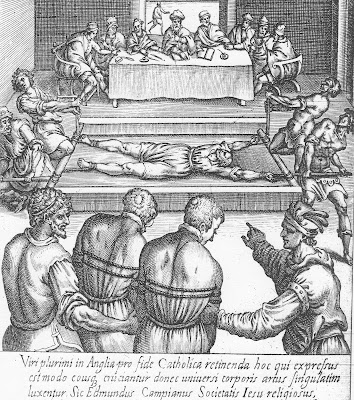 The Other Inquisition:
Campion being racked in the Tower of London, on a torture warrant issued by Queen Elizabeth I. In the foreground two more priests await their own torture.

Think you know St. Edmund Campion and his nemesis, Queen Elizabeth I? Think again! This new revisionist history turns the Establishment story inside-out. We add pieces to the puzzle Protestant and Catholic historians have concealed.

• Edmund Campion was one of the most astonishing personalities in an age of astonishing men and women. His struggle against the Elizabethan inquisition has never been fully explicated, until now. Most Catholic historians have neglected or hidden important background information about how and why Campion was sent to certain death.

• Queen Elizabeth I, a paragon of rulership for Conservatives and Liberals today (who don’t know what they’re talking about), ordered the torture of more dissidents than any other Tudor or Stuart monarch. Here is the sinister side of the celebrated monarch which Protestant and secular historians have suppressed.

Sections include: Sander’s Invasion of Ireland; Pope Pius V’s Regnans in Excelsis; Campion’s Golden Years in Prague; Prague after Campion: The Occult Imperium; Campion is ordered to England and Certain Death; The Torture Queen and Her Prey; Debating a Half-Dead Jesuit: A Tortured Dissident vs. the State’s Theologians; The Protestant Theologian Who Pleads for the Life of a Jesuit; Torture in English law; Injustice to Campion radicalizes English Catholics; and more!

Also in this issue: John Quincy Adams and Protestant Opposition to Freemasonry in the Early Republic

These are in-depth articles, filled with meticulous detail and scrupulous striving for historical accuracy.

Revisionist History is a printed publication consisting of exclusive subscriber content which does not appear online. Join our community of leaders and achievers and subscribe today! 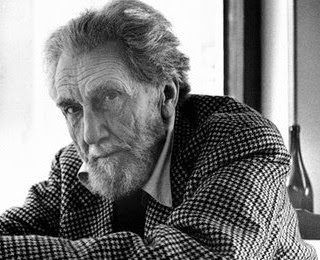 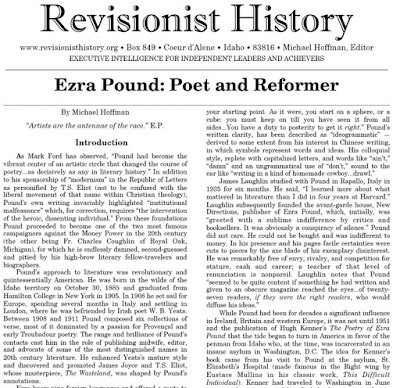 Here are new revelations concerning the life, literature, imprisonment and struggles of the famous writer. We leave no stone unturned. Learn his poetic aesthetics, money reform and how he was railroaded into an insane asylum for twelve years. We answer those who say Pound repudiated his life’s work after his release. Here’s the biography of an exemplary man as you have not read it before.

ALSO IN THIS ISSUE

Dossier on the late Supreme Court Justice and the new subversive movement inside “traditional” Catholicism which views Judaism as more sinned against than sinning. Scalia played an out-sized role in this deadly development. A shocking investigation you will find nowhere else. Don’t be deceived by appearances. Our factual dossier, illustrated with rare documents and photos, exposes the tragic and unfortunate truth concerning the work Justice Scalia did for the other side.

Did Stalin Want War With Hitler?
Contents: Germany’s Struggle Against the Moloch of the Soviet Union: Options and Consequences.

SECRETS OF THE CIA The tangled web of crime and conspiracy of Allen Dulles. Explore Allen Dulles’ networks (German Reichsbank; Bank of International Settlements; Mellon and Dupont dynasties; German Prince Maximilian Egon von Hohenlohe; Standard Oil and the CFR); his duplicitous “Nazi” image; his relations with Sidney Gottlieb and MK-ULTRA. Also: “Roots of Revolutionary Dictatorship.” We investigate how ancient traditions of Christian nations were suddenly outlawed and punished. Revolutionary dictatorships established the precedent to outlaw our American heritage and make esteem for symbols and heroes of our past a hate crime. Plus Pope Francis’ “Sinister Synod.” And: “Willis Carto: A Reminiscence.”
USA: $9.00. Canada: $10.50. Foreign: 11.50

Hitler Had Him Murdered: Gregor Strasser, The German Visionary Who Could Have Led His Nation To A New Birth Of Freedom.
The Untold History of the Exemplary Life and foul Assassination of one of the Greatest German Leaders of the 20th century.

Here is history that is sure to shock, edify and enlighten in ways that readers have come to expect from Michael Hoffman’s  revisionist scholarship.  Why settle for being mentally trapped by cliches and slogans? Break out of the Right wing’s consensus-reality by studying and learning from the suppressed facts presented in this issue. Sections include: Strasser’s Spiritual Vision; Gottfried Feder and Strasser; Hitler, Strasser and Christianity; A Straight Look at the Weimar Republic; Spengler and Strasser; Strasser’s Ideology; The Night of the Long Knives. Also in this issue: “Pat Buchanan vs. Pope Francis.” And: “Press Gang Enslavement of Whites Denied.” USA: $10.00. Canada: $11.50. Foreign: $12.50

Posted by Michael Hoffman at 10:11 AM