110 issues have been published thus far
Purchase Issue no. 110 below

Back issues are available here and here and below

Purchase the September issue of Revisionist History® newsletter (no. 110)!

The Suicide of the West
Analyzing our drive for self-destruction

EXCERPT: “Hermes is just one of the thousand names of Satan and the death wish is so strong among his disciples that they cannot resist their own victimization. The revolution under way is stage two in what the Obama administration initiated (though groundwork was laid by George W. Bush and previous presidents as far back as Woodrow Wilson). There are many stages remaining. As the Girondists and LaFayette’s party were consumed by the Jacobins led by Robespierre (who would soon enough be executed by other revolutionaries); as Lenin consumed the Mensheviks and Stalin in turn consumed Lenin’s comrades, the revolution only beginning to emerge will eat successive generations of radical activists. Leftist Satanism manifests as intense hatred for the past—any past will do—even the past that produced the ancestors of the revolutionaries themselves. Whatever is beautiful and natural must be reduced to ashes by the barbarian anarchists who lack the one grace possessed by the barbarians who overthrew Rome, the spark of life, the desire to sow one’s genetic seed. The revolution we face is birthed by the forthcoming reign of dead matter intended to blacken, not green the earth. Fertility is its detested foe...”

CONTENTS: Changing the Cultural Memory of Americans; Corporate Capitalism and Woke Ideology; Whites in Bondage in Early America; Madhouse Policing of Every Word and Phrase; The Phony “Luhv” Revolution, and much more.

Also in this issue: The Protestant “antifa” —  Statue and Image-Smashing in Early Modern Christendom

Plus: Elon Musk Warns Silicon Valley is “Summoning the Demon”

And: A Survey of Anti-Christian Hate Speech in the Media


Subscribe and we will start your subscription with this September issue (no. 110).

To purchase this issue only, send an e-mail to: rarebooks14ATmac.com (substitute @ for AT in the preceding e-mail address). Include your name and the country where you are resident and we will e-mail you an invoice for payment by credit card at our secure online store.
US residents: $10. Canada: $11. Foreign: $12 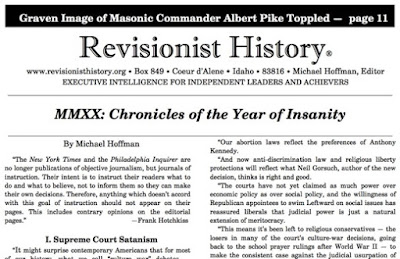 2020—Chronicles of the Year of Insanity

Also: The Cannanite Genetics of Contemporary Arabs and Judaics.

Plus: The Fall of the Monument to Satanist Albert Pike. Trump Pledges to Re-erect it

Michael Hoffman's incisive analysis deconstructs the riddles at the center of our occult times. Here's enlightenment that will inform and encourage you! 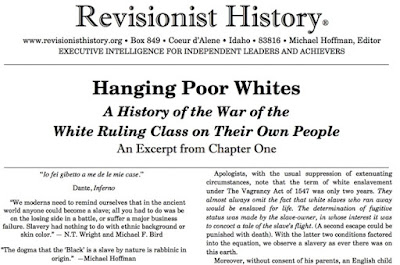 In this issue we offer readers a sneak peak at part of chapter one of Michael Hoffman’s forthcoming book, “Hanging Poor Whites,” the long-awaited sequel to They Were White and They Were Slaves. Hoffman surveys the laws under Protestant monarchs Edward VI and Elizabeth I that established the sub-human status of English whites demonized as “vagrants, rabble, idlers, ruffians, masterless men and harlots.” He excavates the chronicle of the enslavement of the English from their earliest history in post-Roman Northumberland. In his most radical departure from almost every other history, Hoffman argues that the British empire was not founded on regard for race, but occult hierarchy, through solidarity with foreign hierarchies consisting of aristocrats of color. This hierarchy took precedence over race. The English poor were regarded as not only inferior to the aristocrats of England, but also inferior to the Raj of India, the kings of Africa, the princes of the Caribbean and the Native Chiefs of North America. This is the shocking and world-historic revisionist truth which it is Michael's sworn mission to document in book form.

Plus: “Thule: The Secret Society that Indoctrinated Adolf Hitler and Launched His Career”

And: “The British Crown’s Massacre of their Russian Brethren”

Also: “The Right Wing March to War Against Red China: The Behemoth the Cryptocracy Created”

Plus: “Coronavirus News and Views” — and more! 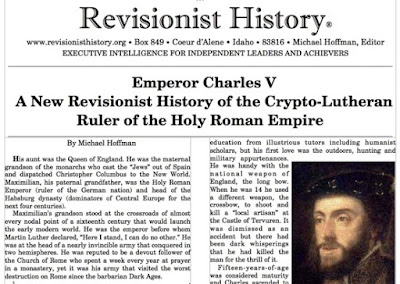 Michael Hoffman tracks the appalling covert alliances and duplicity behind the campaign banners around which the Christian people, the targets and victims of this head-spinning network of dual and triple loyalties and back-stabbing, were expected to march, bleed and otherwise pay for.  This is as fascinating and instructive as revisionist history gets —and it is yours in the pages of issue no. 107, March 2020.

Also in this issue: “Documenting Hitler: Our Dissenting Enterprise.” New information unearthed. Plus: “1774”— How American Patriots Fought their Government to Defend Freedom, not Slaveholding. Also: “Scapegoating Romans and Pontius Pilate.”

Issue no. 107 shipped to Foreign and Overseas: 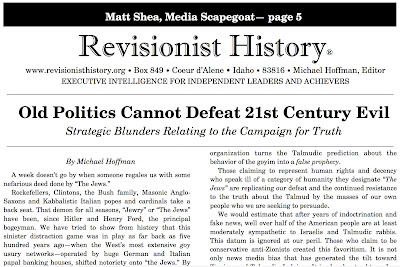 Old Politics Cannot Defeat 21st Century Evil
Michael Hoffman focuses on the strategic blunders committed in the Campaign for Truth: Fulfilling Talmudic Prophecy; the Failure of Armed Resistance by the Palestinians (and Gandhi's Solution); How Right Wing Resistance Achieves Zionist Objectives. Hoffman exposes the hidden forces controlling our resistance movement and leading us to defeat after defeat. He offers a way out of the web of deception and fresh strategic thinking needed for victory. This is a major analysis and exposition proposing a startling new foundation for winning this Great Battle in which we are engaged.

Counter-Intelligence Report: Rep. Matt Shea: Media Scapegoat. Analyzing the hysterical attacks on an obscure patriot Republican legislator from Washington state portrayed by the media as a virtual demon from hell, while the actual demons are extending the imposition of the revolutionary change in our nation which Shea is battling. 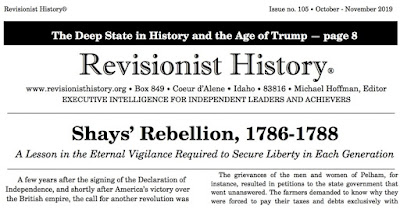 Shays Rebellion: A new history of the forgotten revolt by American farmers. Ten years after the Declaration of Independence, the yeomanry of Massachusetts rose up in protest of  banks, corrupt courts, lawyers, debt and taxes. Sections include: State Militia join with the farmers; The bankers’ mercenary army; the “Black List;” Seeking the abolition of debt; Shays’ Rebellion and the Anti-Federalists at the Constitutional Convention. Michael Hoffman brings to life a lesson in the price of liberty: eternal vigilance, even when the opponents are George Washington and Sam Adams! Also in Revisionist History® 105: The Deep State in History and The Age of Trump: Our study of the history of the Cryptocracy intentionally creating enemies for America to fight; The Elements of the Deep State behind Trump; The Principles of leadership in the Communist Chinese Deep State: the all-important concept of the “Empty Boat.”  And more!

I. The Talmudic Attack on America’s Founders
The Zionist Media’s “1619 Project"
Lesson plans for America’s high schools include the new “1619 Project” from the New York Times, a book-length study of our nation depicted as “born in the original sin” of black enslavement. It marks the birth of our supposedly sick and evil nation as the year 1619, when the first black slaves arrived. This is a vicious Talmudic attack and we refute it every step of the way. Sections include: The Civil Rights Movement and the Decline of Black America; Crafting a “Jews-and-Blacks” Alliance, Paying Slave Reparations to Black Americans, Thomas Jefferson on the History of White Slaves, St. Patrick was a White Slave, Jefferson vs. Rabbi Maimonides, and much more.  Also in this issue:  II. Mass Hypnosis and Mass Shootings — The Cryptocracy’s Summer of Terror. Hoffman deconstructs the occult theater of “gun violence” staged by the Deep State: Twilight language, numerology, Revelation of the Method and psychological warfare, decoded! Sections include: El Paso Cielo; National Security Shootings for a Higher Good; Mental Illness as Conditioned Mass Phenomena; Killed in custody: Jeffrey Epstein and Whitey Bulger; Hidden Force Behind Occult Terror No Longer Hidden and more!
U.S. customers:

Posted by Michael Hoffman at 9:09 AM